Something to Build On

In conjunction with SLHS, committee member and website administrator Ian Gasse has published a history of the co-operative movement in Dumfries from the mid-nineteenth century down to the First World War. Here he provides an outline of the growth of co-operation in the south-west Scottish town over almost seventy years. Copies of Something to Build On: The Co-operative Movement in Dumfries 1847-1914 can be purchased via the SLHS website (see under Occasional Publications) at £3.00 off the full price, and with £3.00 from each sale going to the Society.

The history of the organised working class in Britain following industrialisation, in the nineteenth and early twentieth centuries, is substantially the history of the friendly society, the trade union, the co-operative society and, by the end of the nineteenth century, the political party. All were examples of collective self-help, and by the First World War, the status of both the trade union movement and the co-operative movement was well established; and that of the Labour Party, increasing.

In Culture and Society 1780-1950, his seminal analysis of the impact of industrialisation on British culture, Raymond Williams drew the following conclusion about working-class culture:
We may now see what is properly meant by ‘working-class culture’. It is not proletarian art, or council houses, or a particular use of language; it is rather the basic collective idea, and the institutions, manners, habits of thought and intentions which proceed from that. … The culture which it has produced, and which it is important to recognise, is the collective democratic institution, whether in the trade unions, the co-operative movement or a political party. … When it is considered in context, it can be seen as a very remarkable creative achievement.

The co-operative movement in Dumfries can claim to have been part of this culture and its experience during the second half of the nineteenth century, following the formation of the town’s first consumer co-operative society in 1847, led to a 67-year history culminating, in 1914, in a society that had half the town’s households in membership. By then it also had annual sales equivalent to £7 million at 2021 prices, and it was embarking on the early stages of developing a housing scheme for its members.

Indeed, the financial success of Dumfries & Maxwelltown Co-operative Provision Society from the 1850s through to the later 1870s threatened to take the society away from its roots, after it had been established as a joint stock company by a group made up substantially of local Chartists, and with the aim of providing pure, unadulterated foodstuffs ‘at a low price’, partly as a direct challenge to a cartel of local oatmeal merchants. An attempt to convert it to an equitable society, based on the Rochdale model, subsequently failed because, as president Samual Cairns acknowledged in 1886, two years after the society had finally converted to equitable status:
Some of the shareholders wished some years ago to change to the system they had now adopted; but the proposal was not entertained. It was asked, Is it not doing well enough now? No one could say it was not doing well for them; and it was agreed to let well alone.

Two attempts to create equitable societies in Dumfries followed. The first was by the Dumfries & Maxwelltown Equitable Co-operative Society in 1861 – a society that started well, only to disappear, so far without trace, some time in late 1866/7. The second was by the Queen of the South Co-operative Society in 1881, but a failure to control its awarding of credit – combined with the arrival in Dumfries of Thomas Lipton in 1890 – undermined its core sales, and both it and the reformed Dumfries & Maxwelltown Society, agreed to amalgamate in 1892.

Despite a long-running ‘trade war’ with local shopkeepers and traders – and with the Scottish Traders’ Defence Association – beginning in 1888, but becoming more highly charged in the mid-1890s and again in 1908, the newly amalgamated society, the Dumfries & Maxwelltown Co-operative Society, flourished, particularly after 1900. By 1914 it had six shops in Dumfries and Maxwelltown, two more in nearby Castle Douglas and a Co-operative Women’s Guild, as well as the large sales noted above, and a membership of almost 2,500, based on one member per household. It also, in its attempts to build a ‘co-operative culture’, provided an annual soirée and an annual ‘rural festival’, for which it chartered two trains of sixteen or seventeen carriages from Dumfries station to a local beauty spot, for an afternoon of entertainment and enjoyment.

The financial success of the society was commended in 1898 by the Scottish Co-operative Wholesale Society president, William Maxwell, when he was guest speaker at a society soirée.
Such a magnificent gathering, he said, was enough to inspire any co-operator. … [H]ere there was invested a capital of £6500; and he found, doubling the figure in their last half-yearly balance sheet, that the divisible profit last year was £3072. If you calculated that, not on purchases as they were accustomed to do, but on the capital, it was equal, not to five or ten per cent, but to 47 per cent. (Cheers) Such a dividend was almost unheard of … Why, Klondyke was not in it with the Co-operative movement. Yet this movement was said by those outside it to be a hallucination. What would they say if any gentleman given to philanthropy were to endow this town with £3000 every year? They would erect a statue to his memory, and never cease singing his praises.

But, at the same soirée, Maxwell also reminded his audience of the broader aims of the movement:
It was not the monetary value of co-operation that was all that was important for a community and country like ours. It was the fraternity which it had fostered among the working men of the country; it was the teaching of them to trust each other; it was the higher moral tone which it had introduced into the commerce of the country, for co-operation had set its face against light weight, adulteration, and every thing that was iniquitous in commerce. (Cheers) … This movement would not do everything for the working classes; but in conjunction with temperance and education it would put the working classes in a higher position than they had ever dreamed of. (Cheers)

Thus, by 1914, co-operation – and the co-operative ethos – were well on the way to becoming firmly embedded in the retail, social and cultural life of Dumfries and Maxwelltown. 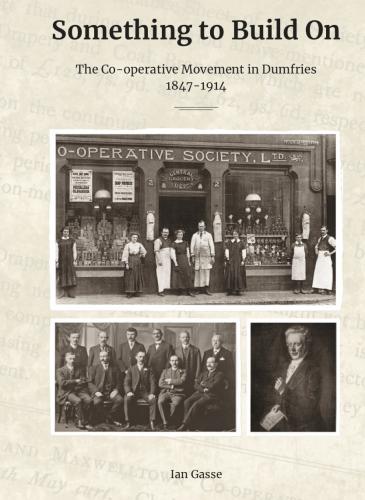