Reclaiming the History of the Dumfries Working Class

Mobbings, Struggles and Strikes: Episodes in the history of the organised working class of Dumfries, 1771-1914

This new book begins, in fact, in the later eighteenth century with an account of the food riots (the ‘mobbings’ of the title) which affected Dumfries intermittently – and initially following poor local harvests – from 1771 onwards. These demonstrations of ‘collective bargaining by riot’ took place in 1771, 1774 (?), 1796, 1799/1800 and 1817. They were followed by further riots in 1826 and 1842, when the repressed anger of working people –at the power of meal merchants to exploit them – took its revenge in the wilful destruction of meal-mongers’ shops and homes. Indeed, the first Dumfries consumer co-operative society, the Dumfries & Maxwelltown Co-operative Provision Society, was formed in 1847 as a direct result of this kind of exploitation by meal merchants.

The book, which comprises seven separate articles on different aspects of Dumfries labour history, continues with a long review of the local campaigning, from 1838 onwards, for manhood suffrage – the vote for working men. This began with the establishment of the Dumfries & Maxwelltown Working Men’s Association in 1838, and the development of a local Chartism movement. It was followed by a prolonged period of newspaper campaigning in the Dumfries & Galloway Standard & Advertiser, until, on New Year’s Day 1867, the local skilled trades and artisans arranged a highly successful ‘reform’ procession and demonstration in the town – with at least five thousand people taking part – and the formation of a Dumfries branch of the Scottish Reform League. These moves supported the national campaign for the vote for working men in the borough constituencies, which was achieved in the 1867 Reform Act, and, seventeen years later, in 1884, a similar procession and demonstration was arranged supporting Gladstone’s Franchise Bill, which gave the vote to working men in the county constituencies.

Trade unionism and strikes to win improved wages and working conditions form the subjects of the other five articles. The first chronicles early moves by farmworkers in Dumfries and Galloway to form farm servants’ protection societies – or ‘ploughmen’s associations’, as they were often known – in an attempt to negotiate better pay and shorter hours with farmers at the region’s hiring fairs. In the event, the farmers boycotted workers connected with the ‘unions’, but some of the societies became established friendly societies, subsequently supporting farmworkers through more difficult times later on. Once again, the Dumfries & Galloway Standard & Advertiser newspaper played an active – and acknowledged – role by supporting the farmworkers and promoting their activities, unlike the other local newspapers, which all backed the farming interest.

The remaining four articles describe strikes: by journeymen bakers – twice, in 1889, as part of a Scottish national strike, and in 1905, by stonemasons, in 1899, and, unusually, by women hosiery workers – at a glove factory in Maxwelltown, in 1912 – who had support from the National Federation of Women Workers. This last dispute went to arbitration and the women won. The stonemasons agreed to mediation by the local provost and gained half of what they sought; the bakers on both occasions were successful with several firms though they failed with others, who used ‘blackleg’ labour to keep their businesses going.

Overall, the book provides an overview of some of the ways in which the local Dumfries and Maxwelltown working class successfully used collective self-help to improve their lives and livelihoods, and, it is hoped, rescues them, adapting E P Thompson’s phrase, from ‘the enormous neglect of posterity’. Their history currently remains incomplete but a start has been made on its recovery.

Both books have been published jointly with the Scottish Labour History Society. They are available direct from the author via coophistory@myphone.coop, or for members of the Scottish Labour History Society via the Society’s website (www.scottishlabourhistorysociety.scot) at a reduced cost. Both books are in hardback and are illustrated. Mobbings, Struggles and Strikes (416 pages) is £20.00 plus £4.00 p&p, Something to Build On (256 pages) is £18.00 plus £4.00 p&p. 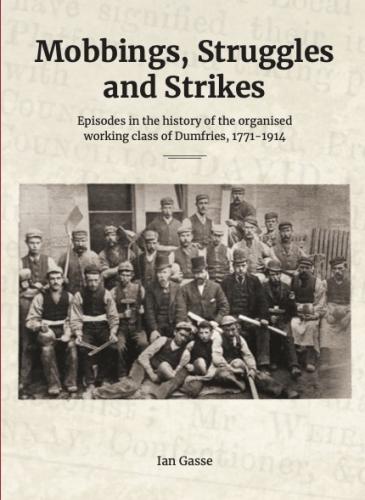 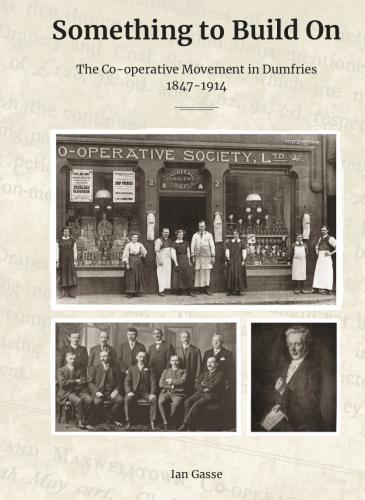 Something to Build On cover
Join the Society