The Labour History of Dumfries

SLHS committee member Ian Gasse has produced a booklet about labour history in Dumfries, in the form of a ‘labour history trail'. This was to have been launched, in conjunction with Dumfries Trades Union Council, with a guided walk around the town on May Day. The coronavirus lockdown prevented this, but, below, Ian provides the background to the development of his booklet, in the hope that it may stimulate others to seek out the labour history of other Scottish towns.

For a free copy email ian.gasse@poptel.org with your name and postal address. 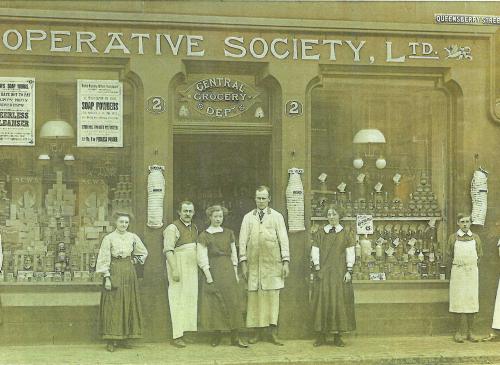 If you were to ask most Scottish people about the history of Dumfries it is likely you would be told about the town’s connections with the national poet, Robert Burns, and possibly also that the medieval Scottish king, Robert the Bruce, began his ascent to the Scottish throne by murdering the ‘Red’ Comyn (not, be it noted, an early socialist) in one of the town’s churches some time during the Middle Ages. You would be most unlikely to get an answer which included anything about the town’s organised Chartist, labour or co-operative movements.

Yet Dumfries, as I am sure is the case with many other medium-sized Scottish towns, has what I have come to regard as a rich ‘labour history’ which is both worth recording and worth studying, if only to provide a contrast and comparison with other towns in Scotland of a similar character and size – and to demonstrate that the country’s radicalism is not confined just to Glasgow, Edinburgh and the other major cities.

Uncovering Working Lives
Since moving to Dumfries & Galloway from England in 2012, I have spent much of my spare time combing the nineteenth-century Dumfries newspapers in an attempt to discover as much as I can about the town’s labour history. As a result, earlier this year I published a small booklet, Uncovering Working Lives, which provides a ‘labour history trail’ around Dumfries – and its lesser known ‘twin’, on the other side of the River Nith – Maxwelltown, in order to give both residents and visitors a sense of what the local organised working class achieved over the hundred and forty-odd years from c1770 to the First World War.

The booklet highlights some of the places connected with these achievements – such as the locations of late C18 food riots, the ‘houses of call’ of the town’s early trade unions, the sites of early co-operative society ‘stores’, the locations of early reform demonstrations and protests, and the graves of some of Dumfries and Maxwelltown’s working-class ‘pioneers’, like Chartist and early co-operator Andrew Wardrop, reformer and co-operator Samuel Cairns, and early Scottish Labour Party branch secretary and campaigner Samuel McGowan.

Archive resources
To get to this point I was initially fortunate, through a chance encounter with a former regional manager of the Co-op at a screening of a film sponsored by the Co-op at the Robert Burns Centre Film Theatre in Dumfries, to discover there was a rich – largely unknown and untapped – archive of minutes and other material about the early co-operative societies in Dumfries and Maxwelltown, held at the Dumfries & Galloway Archives in the town’s Ewart Library.

The Archive staff welcomed me as someone who could do a first audit of this co-operative society material and my first few months of volunteering were taken up – one morning a week – with logging the range of material contained in the Archive – from minute books to quarterly reports to various kinds of correspondence. When I had done this, it seemed sensible to start reading the minute books and I began with the earliest extant minutes of the Dumfries & Maxwelltown Co-operative Provision Society, covering the years from 1870 to 1879. As a result of this, I was able to produce an article, Co-operation in 1870s Dumfries, which was published in the Transactions of the Dumfriesshire & Galloway Natural History & Antiquarian Society for 2016. 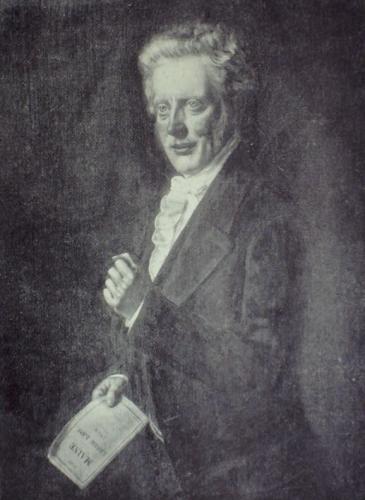 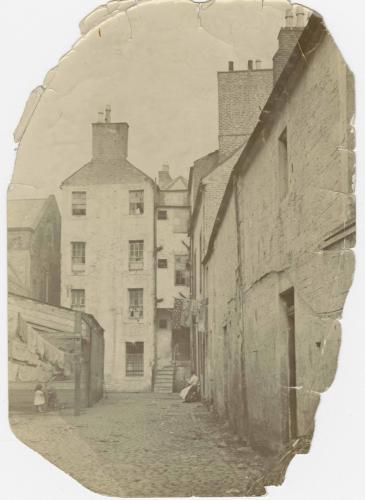 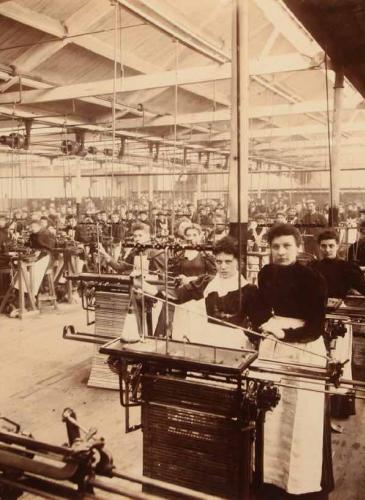 Co-operative societies
But this was only a beginning, as having discovered some of the idiosyncrasies of the index to the Dumfries & Galloway Standard & Advertiser newspaper, which had the co-operative stores and shops listed under ‘Societies’ rather than ‘Retailers’, I began to find a large amount of additional information about the Dumfries & Maxwelltown Co-operative Provision Society, contained in the press reports of the Society’s quarterly, half-yearly and annual meetings and their annual soirées. The Society had been established in 1847, shortly after the more famous Rochdale Pioneers, (a) to challenge local cartels of private traders who were fixing the prices of oatmeal, flour and bread, and (b) to provide pure, unadulterated basic foodstuffs at affordable prices for working-class households. The Society proved financially successful from the outset – it took the equivalent of £400,000 in the six months from December 1847 to June 1848 – and expanded almost immediately into two shops – with one in Maxwelltown as well as one in Dumfries.

The next minutes I read were in the single minute book of the Queen of the South Co-operative Society, which was active from 1881 to 1892. It was set up, unlike its predecessor, which at first operated as a joint stock company, on the Rochdale principle of offering dividend on purchases, but the arrival of the Lipton multiple chain store in Dumfries in 1890 badly affected both societies and they merged in 1892. As a single entity, and despite the continuing hostile activities of a branch of the Scottish Traders’ Defence Association in the town, the resulting Dumfries & Maxwelltown Co-operative Society then prospered enormously in the period up to the First World War – by which time it had an annual turnover of the equivalent of £6.5 million, with six shops in Dumfries and Maxwelltown, and two in nearby Castle Douglas – and it became a permanent feature of Dumfries life until the late twentieth century, when it, in turn, merged with the Borders & Lothian Co-operative Society.

Riots, Chartists, trade unions, strikes, demonstrations and socialists
But searching for more details about the co-operative societies in the two Dumfries newspapers up to the First World War led to chance encounters with reports on other labour history activity, in the form of items on food riots (with grain and meal requisitioned from ships by ‘meal mobs’), Chartism (with a visit by national Chartist leader Feargus O’Connor in 1843), early trade unions (including an early attempt to form a farmworkers’ union in 1867), strikes (often by building trade workers), reform campaigns (demonstrations of up to 10,000 people in the local Dock Park in the reform years of 1867 and 1884) and, from the 1880s, the early life of the local branches of, first, the Scottish Labour Party, and then, the Independent Labour Party. Dockhead, on the Dumfries side of the Nith, close to the suspension bridge built to enable workers from Dumfries to cross to the new – late nineteenth-century – textile mills and factories in Maxwelltown, became a ‘speakers’ corner’ with regular Sunday meetings of the ILP and other left-wing groups, and with even John Maclean speaking there on two occasions in 1912.

Notable strikes were organised by the local branch of the Operative Bakers of Scotland National Federal Union in 1889 and 1905, by the local branch of the United Operative Stonemasons Association of Scotland in 1899, and by women hosiery workers at a glove factory in Maxwelltown in 1912, who subsequently formed a branch of the National Federation of Women Workers. Dumfries & Maxwelltown Trades & Labour Council was established in 1911, partly as a result of the activities of the National Union of Gasworkers and General Labourers in supporting lead miners during a prolonged lockout at Leadhills in South Lanarkshire, which was widely and sympathetically reported in the Liberal-inclined Dumfries & Galloway Standard & Advertiser. And in 1913 the Scottish TUC held its annual conference in Dumfries – the only occasion on which this has happened.

I cannot believe Dumfries and Maxwelltown are unique in all this and and am sure that other Scottish towns may well have an equally rich labour history to be rediscovered, for, whilst aiming to rescue the increasingly forgotten history of the organised working class in Dumfries, I was also mindful that the booklet might encourage others to embark on similar researches into their own towns’ labour histories. I am sure there is much to (re-)discover. 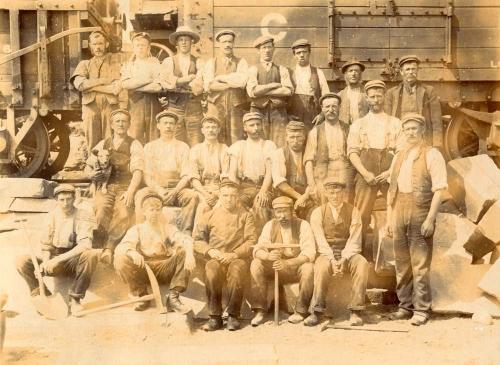 Articles about the Dumfries bakers’ strikes of 1889 and 1905 appeared in the Scottish Labour History Society journal in 2018 and 2019, and an article about the first thirty years of the Dumfries & Maxwelltown Co-operative Provision Society was featured in the 2017 edition of the journal. All are available for SLHS members to download from this website. An article about the 1912 women hosiery workers’ strike will appear in the 2020 edition of the journal.